You are here: Home / History

The Society of St. Vincent de Paul began in Paris, Fance, in 1833 when a young law student at the Sorbonne, Frederic Ozanam, was challenged during a debate to demonstrate what he and his fellow Catholic students were personally doing to help the poor in Paris.
Ozanam’s reaction was immediate.  Within weeks, Ozanam, at 20 years of age, and six of his peers formed the first “Conference of Charity.” 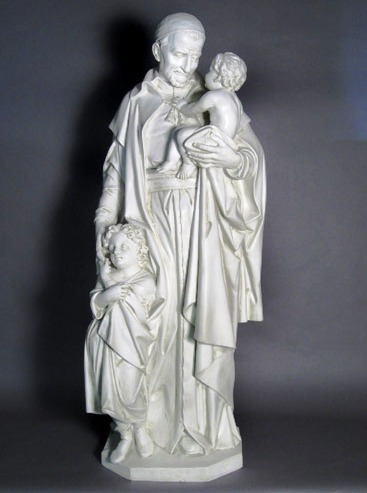 Under the conference, this group of seven men financed their works of charity out of their own pockets and from contributions of friends.  They visited the poor in their homes, providing them with needed aid and assistance.
At the prompting of Monsieur Emmanuel Bailly and Sister Rosalie Rendu, superior of a convent of the Daughters of Charity, Ozanam soon placed the conference under the patronage of St. Vincent de Paul who had spent his life in 16th century France serving the poor.

Within a few years, the original group of seven grew to 600, spreading to 15 other cities and towns in France, numbering more than 2,000 members.

Twelve years later, in 1845, the Society of St. Vincent de Paul crossed the ocean to St. Louis, Missouri, where the first American conference was formed.  To this day, St. Louis remains the Society’s national headquarters.

Because of you, hope lives on for struggling families in southwest Michigan. Give today.

The St. Vincent de Paul Ministry office and food pantry is located at:

Directions: St. Vincent de Paul Ministry is directly on the parking lot on the west end of downtown Otsego. The office and food pantry is now one block west of the main traffic light in downtown Otsego, directly behind the WIC State Agency office and clinic.

Inspired by the values and example of St. Vincent De Paul, we are a group of Catholic lay men and women seeking to grow spiritually through prayer and person to person service to the poor.

We are located at